Patrons who have purchased tickets through the Donald L. Tucker Civic Center  can call 850-645-0747 for thier refund. Patrons can also visit the Box Office Monday through Friday 10am-5 pm with their tickets as well as their credit/debit card and ID and the refund will be issued to the original method of payment. If tickets were purchased with cash, a cash refund will be issued.

It's been 50 years since Randy, Jeff and Teddy, left the cotton farms of Fort Payne, Alabama, to spend the summer playing music in a Myrtle Beach, South Carolina bar called The Bowery. It is a classic American tale of rags to riches. From humble beginnings picking cotton in the fields to international stars that went on to sell 80 million albums while changing the face and sound of country music.

Quality songs that have become the soundtrack for American life are the foundation for ALABAMA’s stellar career. Alabama introduced rock style guitars, lights, pyrotechnics and sounds to the country audience that has inspired many of today's brightest country stars including Kenny Chesney, Jason Aldean and Luke Bryan.

While their music continues to stand the test of time, their numbers and stats are beyond compare. 50 years since starting the band, Alabama has charted 43 #1 singles including 21 #1 singles in a row and have won over 179 CMA Awards, Grammy Awards, and ACM Awards. They are members of the Country Music Hall of Fame and have their own star of the Hollywood Walk of Fame. They are also world-class philanthropists who have raised over 250 Million dollars for charity. Celebrate 50 years of ALABAMA on their 50th Anniversary Tour coming to the Donald L. Tucker Civic Center on January 22.

Don't miss them live when they come to the Tucker Center on January 22nd to open up on Alabama's 50th Anniversary Tour! 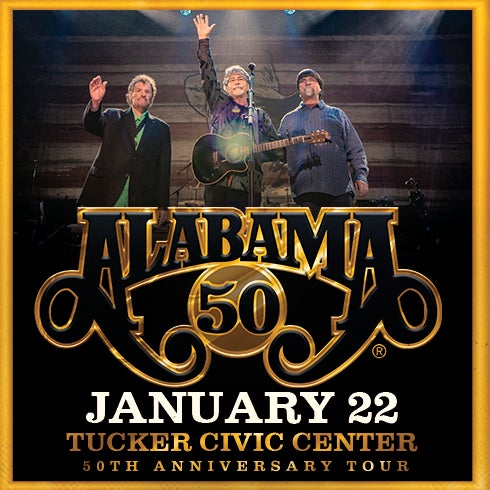